All of us make a number of assumptions every moment of our lives.

We tend to assume what we order at McDonalds will be what we get.  We assume the person coming from the opposite direction on a highway or motorway will stay on their side of the road.  We assume the lights will come on when we flip the wall switch.

Aside from the adage claiming “When we assume, you dare make an ‘ass out of u and me,’ our assumptions far too often prove to be wrong!  The chances your McDonalds order is correct is proportionate to how far away from the restaurant you are when you check it; the person driving toward you often crosses the dividing line while answer their phone and we are always surprised when the lights do not come on as we “flip the switch.”  It’s always risky making assumptions!

One of the tacit assumptions made in history for over two-hundred years is the continued existence of America and its influence—this is especially true of its citizenry.

Please keep in mind the underlying assumption I am making here (one I make by faith—and one in which there has never been a disappointment) is the validity and truth of Scripture (remember, I am a pastor-dude).  Regardless of the pundits and the critics, Scripture and biblical prophecy has never been proved as wrong.

I remember being interviewed by a German independent documentarian when I was living in Illinois.  The question came up regarding the history of the world and Scripture; basically, what the Bible says about the future.  As I explained the Bible’s declaration of the future coming anti-Christ and the re-subjection of Europe, the Middle East and much of Asia by his government, she stated many people in Europe would be highly offended by this interpretation. 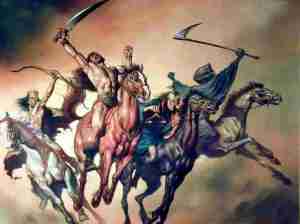 Artist’s rendition of the Four Horsemen of the Apocalypse

I asked her if she understood the prophecy as a statement of further American hegemony; in other words, was she assuming Christianity and its belief system were synonymous with America and its culture?  Being from Germany and being thoroughly secular in her ideology, she saw no difference between “America” and “Christianity.”

What I then told her almost left her speechless.  I informed her there are no symbols nor is there any mention of “America” in any biblical prophecies; for whatever reason, the sovereign entity of the United States plays no role in the affairs of the world in the prophecies contained in the Bible regarding humanity’s future.

Does this mean America is no more?  Has it been marginalized politically by world events or the rise of new and more powerful world powers?  God in His wisdom does not inform us.  All we can know with surety is there is no mention of the United States in end-times descriptions.  While there are many who will try to insert an American presence into the events of the last days, it simply is not there if one follows the normal rules of interpretation.

I believe what we see playing out in the newspapers, RSS feeds and televisions news coverage certainly grants us insight into the beginning of the demise of America.  America has lost much of its influence internationally.  Because we have failed to discipline ourselves financially (especially personally), our government sees no reason to do so and our private, personal actions has granted them the permission to do likewise.

We have lost all semblance of a “moral high ground” due to our own hypocritical stances domestically—it is difficult to chide other countries for their mistreatment and slaughter of their own peoples when we have systematically killed over 50 million babies through legalized abortion.  When other countries choose to kill a group of people like this, we refer to it as genocide!

The Bible states “Righteousness exalts a nation but sin is a disgrace to any people.”  It isn’t a particular sin—it’s not homosexuality or divorce or overeating or overspending—it’s sin!  There is a reason why so many in other parts of the world assume there is a direct link between Christianity and America; for many decades this was a legitimate fact.  Yet when those who have identified themselves with Christ so blatantly ignore the very commands of God, God judges those who know Him more harshly!  The Apostle Peter reminded his readers judgment begins first with “God’s household.”

Here is something to keep in mind as those of us who seek comfort from God’s Word study it: the prophecies of Scripture never demand a particular method or means, they merely tell us what “will be” and sometimes they give us insight into the results which follow.  God has given us prophecy for the same reason He gives us all things: to increase our faith in Him.

Trusting in God’s control of our future and eternity is not an assumption—it’s a surety!