A Marriage of Convenience

There are some things I do not believe I will ever understand.

I went into a McDonald’s a while back and there was a sign hanging on the wall: “Braille menus available.”

There were a couple of songs on the radio in the early seventies which have always given me fits.  One was MacArthur Park: “someone left the cake out in the rain, I don’t think that I can take it, ‘Cause it took so long to bake it, and I’ll never have that recipe again.”

Seriously?  Forget the cake; what about the hash brownies the writer obviously inhaled before writing this jingle?

One of the thornier issues facing Christians in general and myself as a pastor in particular is same-sex marriage.  Over the years I 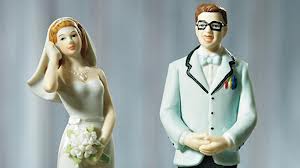 Heterosexual marriage, in practice, doesn’t exactly have a “moral high ground” in this matter.  The divorce rate in America still hovers around the fifty (50) percentile mark; those who identify themselves as Christians are not far removed from this mark.  Yet it seems some of the more strident voices against same-sex marriage emanate from those claiming to be Christians—and some of the verbiage they are using gets pretty ugly!

As a pastor, I teach the entire Bible.  Some believers have been trotting out the passages in Leviticus which describe the results of “men being with men” (my paraphrase) and “women being with women.”  Those words are there and God was serious when He wrote them—He still is.  The Bible states homosexuality is sin—along with many other activities as well.  I also realize there are many people, some of whom I am friends with—who are homosexual.

If you are reading this and have chosen this lifestyle, then I most likely have hacked you off bad enough for you to throw your computer across the room!  I would not recommend that action.

I do not dislike homosexuality any more than I dislike divorce, lying, over-eating, greed or any other sin.  In fact, I can state along with the Apostle Paul, “I am what I am by God’s grace.”  If there is anything I or anyone would consider good in my life, it’s not because I’m better or smarter, it’s because God is good.

Same-sex marriage is going to be what “is” in our country.  Christians are going to have to come to grips with this.  It doesn’t change what God’s Word says, it doesn’t change my responsibility to be obedient to God’s Word.  We live in a democracy.  If the people in this country decide this is okay, then believe it or not, God isn’t shocked one bit.

Allow me to channel my father’s words to me when I was ten years old: “I don’t care what the neighbor kids do—you belong to me!”

Our responsibility as believers is to love people with the love given to us by God and demonstrated by Jesus Christ on the Cross.  This “love” is not sex, the “warm fuzzies” nor are we to embrace the definition our culture demands and then has called “good” what the Bible calls “evil.”  True love is lived, it is demonstrated through our action and obedience to Jesus Christ in our lives.  We do not and cannot demand obedience from those who are “not part of our family.”  They may do as they choose.  We are called by God to demonstrate truth through obedience.

The normalization of same-sex marriage is an opportunity given by God for us to prove the truth of our God and demonstrate our relationship to Him through our obedience.  Christians should strive to have marriages so everyone who sees them would desire a marriage just like them!  This is the whole point of living for Christ: demonstrating the love Christ has for this world through our obedient love for Him!

God has placed American Christians in America.  He understands democracy and the great freedoms it gives.  He also understands the human heart.  When people reject His commands and His offer of salvation, believers should not react in hate and anger.  People who reject the tenets of Scripture are not rejecting Christians or our sensibilities (so we need to get over ourselves): they are rejecting God.

Of course, the demand by the proponents of same-sex marriage who say I must state their cause is just and right are just as unfortunately wrong.  I am not called to approve actions because of social pressure; I am called to be obedient to the Lord.  Just as in first century Rome when the Church was in its infancy, Christians were not persecuted because they believed in Jesus Christ or Yahweh-God.  Christians were persecuted because they refused political correctness and would not call Caesar “Lord!”  Our obedience to Christ will always make us incredibly unpopular.

For far too long Christians have allowed Satan to get them off task by focusing too much on what those who are outside of a relationship with Christ are doing.  Should sin be identified?  Yes it should.  But the identification of “sin” should be motivated by the same love a mother has for the child who gets too close to a hot oven: the warning is clear, it’s strong and its concern is for the safety of the child.  It’s because the mother loves her child.

If we speak out against the sin in this world, let us make sure it’s because we love people like Jesus does.  Our responsibilities are the same as they have always been: to love others.