Noah: “People are the Disease. Judgment is the Cure!”

[Spoiler Alert: Some {not all} key plot facts are discussed in this blog!]

In May 1986 the movie Cobra starring Sylvester Stallone premiered in the US market. While this movie made a respectable showing over the course of its release, it has managed to get on the website www.imdb.com’s list of “Movies So Bad They’re Good.” 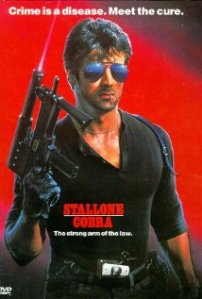 “Crime is the Disease. Meet the Cure.”

In many ways, Stallone may be underrated as a talent; in other ways, quantity does not always equal quality . . . .

The most compelling aspect of the movie Cobra was its tag-line: “Crime is a disease. Meet the Cure.” This short seven word phrase communicated the entirety of the movie’s plot; Stallone is a tough cop who will clean up the mean streets filled with crime.

It would have been better, however, to simply add as a reprise from Rocky III the Survivor ballad, “Eye of the Tiger” to mitigate some extremely sad screenplay . . . .

This past weekend my wife and I went to see the movie Noah with some longtime friends of ours. After spending enough money to secure a very nice steak dinner and tip at the steakhouse, we settled in for the 138 minute long interpretation of the biblical story of Noah and the Ark. While Stallone fought crime, Russell Crowe fought the ecological equivalent of ignorance: people!

Darren Aronofsky who is both a writer and the director of the film Noah stated in an interview with the Washington Post he didn’t have much detail to work with from the four chapters in the book of Genesis (where the story of Noah is contained). Aronofsky observed in the book of Genesis not one word of Noah is recorded; he also points out the name of Noah’s wife, nor the names of any of the wives Noah’s three sons, were recorded. He made this point in the context he had taken liberties with the biblical story. He did take liberties, but eight minutes of spoken word cannot equal 138 minutes of film; he had to add “something” to the story!

For the moment, let’s examine some of the additions and the messages inherent in the film. The biblical story mentions nothing regarding the environmental impact of the pre-flood humanity on the earth. The film makes it clear everywhere man was prior to the flood he also destroyed the environment. Animals were hunted to extinction, lands were deforested and there was a clearly implied element of cannibalism in one of the scenes near the end of the film. 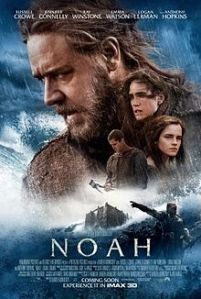 Tubal-Cain, the name of a genuine biblical character listed in the Genesis genealogies, managed to become a stow-away on the ark only to be killed when discovered by Noah with Hem’s assistance. What is noteworthy about Tubal-Cain is his position as the antagonist in the movie and what he is given to say. It was Tubal-Cain who told Hem, “We are made in the Creator’s image” and man had a will to be exercised; the irony of this statement was accentuated with him stating these things while eating raw an “innocent animal!”

One of the greatest mysteries of Scripture is the awesome fact man was created in the “image of God” (imago dei); it is this fact which places the true value of man and human life into perspective. Man has value because he was created by God, made in God’s image and because of Christ’s death on the Cross, we belong to Him. To place this statement in the mouth (no pun intended here) of Tubal-Cain undermines the integrity of this fact and its importance; it also prejudices the viewing audience against the statement we were made in the image of God.

One of the most gratifying things of this movie was Aronofsky’s depiction of the ark. This was the most realistic and biblically accurate representations of the true size of the ark I have ever seen. I read several interviews of Mr. Aronofsky and his Jewish heritage and upbringing surely influenced his desire to show deference to the biblical story. I did not go to this movie expecting either biblical or orthodox accuracy, but the movie was majestic in its sweep.

For all it had, it was what it did not have which misrepresented this story of judgment, salvation and mercy! Gone was the concept of grace—a loving God choosing one man and his family from the midst of a fallen, depraved and incredibly sinful humanity. God chose Noah not because Noah was good, but because God was good and chose Noah to demonstrate His goodness to him and his family!

Aronofsky’s Noah is following a Creator who neither prepares His chosen spokesman nor provides clear evidence of His existence through revealing His plan to Noah. Russell Crowe’s portrayal of Noah, while believable and empathetic, is more akin to a wild-eyed jihadist rather than the man of God who served his Lord for 120 years—one who served his Lord while building the ark and testifying of God’s coming judgment.

The movie neglects to mention how God shared with Noah not only His intentions (judgment of all who have the breath of life in them and detailed instructions for building the ark), but also the reason why God was judging the earth; the Genesis story relates it was because of the wickedness of man which spread throughout creation. The movie would have its viewers believe it was the aggression against nature, its animals and the eco-system man had destroyed which caused the Creator to destroy the earth with a flood.

The message of the movie is just as man is destroying and has destroyed the ecology of this planet today, humanity prior to the flood did the same. In the biblical story God sent the rainbow as a testimony He would never use water to destroy the earth again (the next judgment from God will be fire according to 2 Peter and Revelation), yet it is almost ironic environmentalist today are using global warming to herald a new era of coming floods with rising sea levels which will again destroy our world.

The denouement of the movie occurs in the final few minutes of the film. Noah, in an act clearly running counter to the stated goals given to him by the Creator, refuses to following the thus-far revealed “will” he is to accomplish. Rather than choosing to end the lives of the two infants, Crowe’s character states, “As I looked I them I was filled with love” and he chose to allow them to live!

The dramatic license taken with the facts of the biblical account and even to the point of changing the motives, attitudes and milieu of the characters was understandable and I even accepted all up to this point. Face it, I did not come to this movie to receive a brush-up lesson in biblical theology! Yet the implications which resonated from Crowe’s utterance was unmistakable; when it comes to a choice between following God (in the movie, “the Creator”) or listening to what is in the heart of man, man far too often has a superior morality based on love rather than retribution from a judgmental Creator.

I am not angry about the message the writers and director are sending. The message being communicated is this: while man has destroyed the Creation (and in this movie, the creation is treated with an almost god-like worship) and the Creator has judged and destroyed man and all life for doing so, only man is capable of overriding the will of the Creator (judgment) through a perceived superior moral claim, love.

This is unfortunate in the extreme. Whether through a purposely motivated decision or through an unfortunate experience of circumstances, this movie portrays God as a capricious hateful being who forces those who would serve Him to guess and surmise His will through inference. Even though in Scripture God never expects nor asks man to act on or be judged by that which man does not know, in the movie Noah, it is Crowe’s Noah who rises above the circumstances and provides the true rescue and salvation.

Crowe’s character believed God chose him and his family to be the last of humanity for the purpose to provide a means to reseed the animal kingdom on the newly cleansed earth. It was only through a change of heart in Crowe’s Noah which allows man the opportunity to repopulate and multiply on the earth once more. After his family saw the protection of the animals and their release after the subsiding of the waters, humanity would have ended with them; in some ways this would have been but a slight change in the motivation behind some of today’s suicide bombers. They will surely die, and others with them, but it is a necessary death needed to accomplish the will of their god and guarantee them paradise.

Noah is a fast moving film with plenty of drama and action. The PG-13 rating is due to the scenes of violence and implied animal violence. The acting is superb—which is what motivated me to see this film—but the film leaves one feeling there has to be something more; a better reason, a better explanation or even a better plan for such an event to occur.

God’s intention for the believer, non-believer or even someone who is merely searching, is for them to see the need of a Savior through the events of the Genesis account and the events of our world today! Christ is our ark and our salvation who bore us through the judgment of God. Yet it was God who initially chose Noah and his family to be saved. It was God who provided an ark, the plans, the guidance and the animals to allow life to begin again on a cleansed earth. Of course in the Noah epic, man was still flawed and capable of sin and poor decisions, yet God had a plan to eventually bring His Son to this world so all people who accepted His gift of salvation could come to Him!

Those of us who know Christ are also chosen by the Father! Those who know the Son as Lord are rescued even though our bodies are corrupted by sin.  We will live again in Heaven with God when we have accepted the salvation the Father freely offers to us. One day Christ will return for us; there will no longer be crime, or disease or flaw or flood or death, for all will be perfect.

And perfection needs no cure.